Amid a row of upscale restaurants and coffee shops at the Rochester Public Market is a squat building painted vibrant green and adorned with an illustration of a bright pink brain with a giant blue eyeball.

The all-seeing cranial cyclops is a trademark of Rochester street art darling Mike Dellaria, best known for his wheatpaste art of cultural icons and positive messages around town under the name Dellarious, and the building belongs to him.

Dellaria bought the 2,500-square-foot place in the fall and has since been converting it from a restaurant to a retail shop up front and a studio in the back. Visitors to the store, which opened in November, have an equal chance of finding Dellaria manning the register or busting up the commercial kitchen to make room for his workspace.

The shop sells art and adornments beaming with hometown pride that many Rochester area residents will find familiar, in part because they have been sold for years at Wegmans and because Dellaria has pasted them to utility boxes and walls of expressway underpasses.

There is the Can of Worms soup can. The stylized version of the Kodak Tower. The multi-colored Rochester Police Department booking photo of David Bowie. Stickers are a buck. Prints are $15.

“I like that it’s that accessible,” he says of his store. “That way there’s something for everybody. And as opposed to — not to knock the gallery-setting type thing, but that’s not accessible to everybody. That’s not something that everybody can take part in or feel a part of.”

Images of various Rochester icons that have been given the Dellarious touch — Frederick Douglass, Susan B. Anthony, Rod Serling — share storefront windows with a neon “OPEN” sign and a print that reads, “EVERYONE IS WELCOME HERE.”

Dellaria, 33,  hasn’t had a proper studio in a couple of years, after he stopped renting a space off Park Avenue that he had for a decade. Since then he has outsourced the screen printing of his designs onto posters, stickers, T-shirts, and tote bags to local companies. But he says he’s looking forward to getting back to work.

Once the studio is finished, he says, he’ll turn his focus to adding a gallery space, where he plans to showcase new work that he says will be different from what people have seen at the supermarket and Parkleigh and The Record Archive and other retailers that carry his art. 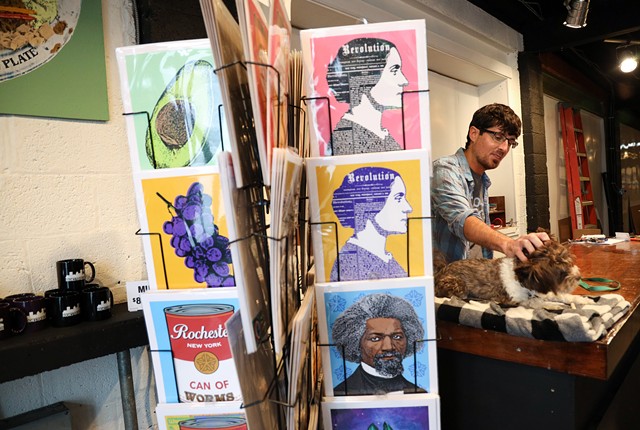 Dellaria’s success as an artist and businessman took an unconventional path.

The Penfield native attended McQuaid Jesuit High School, but didn’t graduate. He later earned his GED and tried college, but dropped out of there as well.

While working a series of what Dellaria describes as “non-career-path jobs,” around 2012 he developed an interest in street art, and says he loved the way that “a short little message or portrait could reach a lot of people.”

“It’s huge to me that I might be able to inspire somebody else like me,” he says. “School didn’t work out. But you’re always told to follow society’s rigid plan. I don’t think there’s one set path that everyone has to follow, or should follow.”

Dellaria was drawn to the ubiquitous art of Shepard Fairey, known for his screen prints and stickers of a stylized face of the wrestler Andre the Giant. He rented a small studio, watched YouTube videos to learn how to screen print, and found his footing through trial and error.

“I had no clue what I was doing, and I would go out and wheatpaste a few things or put up stickers or whatnot, and it just kept getting a good response,” he says. “And I finally figured out what I was doing.”

Dellaria is humble about his growth as an artist. But his covert work putting up wheatpastes of the likenesses of icons, including Malala Yousafzai, George Eastman, Ruth Bader Ginsberg, and Dr. Anthony Fauci, earned him a rabid social media following.

His work got wider attention in 2016 when local media reported on his wheatpaste of a smiling Mr. Rogers on an Interstate 490 overpass. The cardigan-clad friend to children everywhere held a sign that read “LOVE YOUR NEIGHBOR” in response to growing political and social turmoil.

“I try to keep it to positive messages and people that inspire me, and they hopefully can inspire other people as well,” Dellaria says.

Dellaria is like other street and graffiti artists in that he installs his work without permission. Unlike their work, however, his seems to enjoy an almost universally positive reception, with most of the criticism reserved for vandals who deface his work.

“That’ll be ruined by some anonymous degenerate,” wrote one commenter on a WHEC-TV (Channel 10) Facebook post about the Mr. Rogers piece.

As vandalism goes, wheatpastes are fairly low stakes. It only takes a minute or two for a wheatpaste to be sprayed from a surface, so there’s no lasting property damage.

In the past six years, Dellaria has periodically used one particular utility box on East Avenue across from Portsmouth Terrace as a drop point for free artwork, posting about 15 packaged prints and 100 packaged stickers for anyone to take. Each time, he tips off his more than 7,000 Instagram followers to the coming drop.

The freebies are an act of generosity, but they also aid Dellaria’s commercial success by creating a feeling of anticipation and community enthusiasm around his art.

His work has garnered some celebrity attention. When in town for the Jazz Festival, actor and musician Jeff Goldblum signed a Dellarious print of his image.

In 2018 Kodak commissioned Dellarious to do a cover illustration for Kodachrome magazine featuring director Spike Lee, and also put up wheatpastes of the image on an old Kodak factory building. Word got to Lee and he reached out to Dellaria, requesting prints of the portrait.

Dellaria was commissioned twice by the Memorial Art Gallery to create street art to advertise exhibitions. In 2019 Rachael Brown, the MAG’s director of marketing and engagement, approached Dellaria about creating Art Nouveau-style posters to wheatpaste around town advertising that year’s holiday show, which was a showcase of work by the father of Art Nouveau, Alphonse Mucha.

More recently, Dellaria created the posters that advertised the museum’s “Season of Warhol,” a retrospective exhibition of Andy Warhol’s work.

“We really loved the idea of wheatpaste, how you’re putting playbills or things on walls and how they naturally deteriorate over time, it’s just part of the art process,” Brown said. “He makes the community smile, and brings local focus to global issues.”

For now, though, Dellaria’s focus is tossing everything from his building that’s clogging up what will be his studio space, including the kitchen sink, so he can get to work.

“Basically I’ll just try to keep doing things that bring people together,” Dellaria says. “And hopefully bring a smile to their faces.”

Rebecca Rafferty is CITY’s life editor. She can be reached at [email protected]

9 hours ago Milly Claudio
We use cookies on our website to give you the most relevant experience by remembering your preferences and repeat visits. By clicking “Accept All”, you consent to the use of ALL the cookies. However, you may visit "Cookie Settings" to provide a controlled consent.
Cookie SettingsAccept All
Manage consent