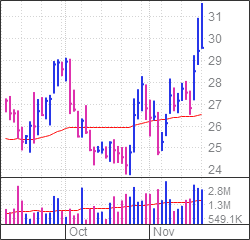 Endeavor Group Holdings (EDR), the talent agency and entertainment and events giant run by Hollywood mogul Ari Emanuel, is the IBD Stock of the Day. EDR stock was setting up in a base as of Thursday.


The setup arrives as Endeavor, a recent initial public offering, reported third-quarter results earlier this week and beat expectations. The company said live events and other forms of entertainment returned following a year of coronavirus restrictions on sports, film and TV production. Endeavor’s assets include the mixed martial arts competition known as UFC, the Miss Universe pageant and the WME talent agency.

The company also forecast full-year sales that were above estimates. Shares climbed 0.5% to close at 29.65 on the stock market today.

The company on Monday reported third-quarter revenue of $1.39 billion. That was above FactSet estimates for $1.32 billion. Endeavor earned 16 cents per share, better than estimates for a three-cent per-share loss.

Endeavor also raised its full-year sales forecast to between $4.89 billion and $4.95 billion. That was up from a prior range of $4.8 billion to $4.85 billion. Wall Street expected $4.904 billion. EDR stock jumped after the report.

Endeavor had more than 6,400 employees as of last year. It operates in 28 nations.

Emanuel, during the earnings call for Endeavor stock analysts on Monday, cited “pent-up demand for entertainment,” a strong showing for UFC’s pay-per-view events.

“While reopening rates continue to vary geographically, we are seeing increased activity across all lines of our business,” he said. “Linear and digital platforms are in a race for more content, creating an uptick in television and film productions.”

“Meanwhile,” he continued, “our talent representation business excluding music and theater is up double digits this quarter versus third quarter 2019. And we have room for more optimism as Broadway recently reopened and music artists (are) commencing multiyear tours in large venues.”

He also called out “the attractive prospects of sports betting” — another one of its businesses. Emanuel noted that the pandemic drove more people to bet online, and that more U.S. states had legalized betting. Endeavor in September agreed to acquire OpenBet, a sports-betting tech company, from Scientific Games (SGMS) for $1.2 billion.

DraftKings Stock: Is It A Buy Right Now After Earnings?

7 hours ago Milly Claudio
We use cookies on our website to give you the most relevant experience by remembering your preferences and repeat visits. By clicking “Accept All”, you consent to the use of ALL the cookies. However, you may visit "Cookie Settings" to provide a controlled consent.
Cookie SettingsAccept All
Manage consent